Mid July sees my favourite weekend of the year, the Latitude festival which the Purple Princess and I have been looking forward to for the last fifty one weeks.  I usually type some guff on here by way of a review but this year I will try to keep things brief.

We like to think we are pretty experienced festival goers and have learnt from previous mistakes however this year I arrived at the campsite totally knackered having pushed the barrow about a mile.  I expect to feel a bit of exertion but couldn't understand why I was so exhausted.  Am I even more unfit than I thought?  Had I not put enough fuel in the body before setting off?  Closer examination of the barrow revealed the tyre was as totally fucked as I was.  Next year I'll remember to check it first...

This year the festival started with warm, breezy, perfect weather on Thursday then got progressively hotter and more humid as the days passed.  This means you really have to look after yourself with food and drink intake but it is still less hassle than a rainy festival.  Festival food is generally shit if you look at in terms of value for money but essential to keep the energy levels up.  We always have at least one hot and too expensive meal from the vendors on site and most of the time it is edible, sometimes even enjoyable.  Everything we sampled this year was average at best.  To supplement this we always have tea making kit at the tent and take loads of high energy food that won't go off in the heat.  Digestive biscuits fit this bill perfectly, they fill you up and give you energy.  Drinking is also crucial and I have learnt from experience not to touch beer until the sun is well on the way down again.  I drink pints and pints of water during the day, especially when it is as hot as this year.

After chilling at the campsite we went for a wander around the now familiar arenas.  I probably say it every year but the Latitude festival is held in a beautiful setting and it really comes alive after dark.  Dinner was a Chicken Tikka masala which was ok,  We didn't check any performances out and decided to ease into the weekend with an earlyish night. 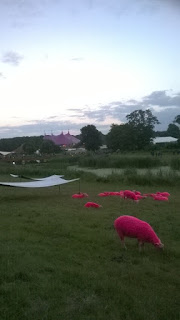 Friday ended up being a busy day.  There was nothing much on the line up that floated our boat so wandered around from stage to stage trying to find stuff we liked.  We started at the lake stage and saw a little bit of Cameron AG then a while later Odetta Hartman, neither of which really moved us in any way.  Also a bit of Rajastan Express at the Obelisk which was pretty good. The first full performance we saw was Honne in the big tent, these kept us moving for the full set but not really my cup of tea.

We rarely visit the Sunrise arena so though we'd cross the bridge for a change.  We got there just in time to see Weaves, a four piece band with a charismatic female singer playing what sounded to me like punked up B52's.  Weaves got a big thumbs up from us both.  Next it was back to the Obelisk stage where we chilled in the sun watching British Sea Power.  I saw these play a few years ago and left unimpressed so didn't expect much was was pleasantly surprised how much I enjoyed them this time around.  By the time they finished I was almost a convert. 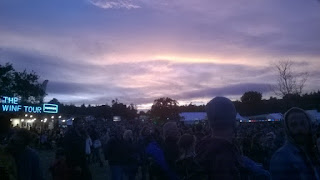 After a rest in the tent and dinner consisting of a very average special noodles from Hot Wok we were back to the Obelisk to meet up with Mr & Mrs G & family to see Beruit, who were pleasant enough. We then had a quick march to the Lake stage to see Loyle Carner, a young British rapper who was excellent and looks to have a bright future.  He seemed genuinely overwhelmed by the size of the crowd and the reaction he got.  Final act of the day was in the big tent, a mad, energetic dance set from Grimes which got us all on our toes.  Grimes is a Canadian songwriter/performer with a quirky attitude and loads of energy, this was a brilliant finish to the day's live music. 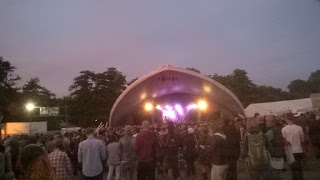 Friday began with no expectations but once again Latitude surprised us and we discovered some great live experiences.  We'd covered a lot of miles during the day and there wasn't much the DJ's played that hooked us in so had another earlyish night.

I must mention our neighbours, a group in their early twenties who seemed nice enough but didn't realise how loud their voices were so we know everything about Anabella, Grace, Darcy, Imogen, Sophie, Isobel, Louis, Theo and Toby, the worlds leading expert on absolutely fucking everything.  NB  These names are not typical for rural Suffolk.

Festival Saturday usually finds the first two days exertions catching up with us and this was the case again this time.  We trudged around with little energy and were heading towards the Obelisk stage to chill out when the horrible country wails of Sturgil Simpson put up an invisible barrier.  This didn't prevent me hearing a horrible cover of 'When the Levee breaks'  Nothing good could ever come from christening someone 'Sturgil' and he belongs in hell.  We dived into the big tent just in time to see Ratboy belt out a blinding set of short, sharp, singalong punk tunes.  The C&W had done us a favour, we would not have discovered Ratboy if we'd have followed the original plan.

After that we resumed the plan of chilling the day away at the main stage.  We saw a little bit of Nathaniel Rateliff who threatened to go country but managed to avoid it.  Next up was a band from our childhood who we had to see for nostalgic reasons.  Squeeze came on and played all the hits from the eighties but for some reason it just didn't work for me.  Squeeze sounded squashed. 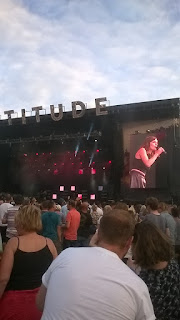 After another break and an ok ish burger & chips for fuel we were back at the main stage to see Chvrches, a three piece synth pop/rock band that my daughter Maddie had introduced me too.  I enjoyed Chvrches who belted out a good foot stamping rhythm and got a great reception from the crowd.  I particularly liked 'Clearest Blue' and 'Recover'.  We then dragged ourselves up to the big tent where we just about summoned up the energy to dance along to an hour of Soulwax.  This was a treat, a great rhythm belted out from no less than three drum kits and loads of keyboard madness eked the last of our dancing energy out.  We were shattered afterwards but it was worth it, Soulwax were excellent.  "It's not you it's the E talking..."

It was noticeable this year that the fashion for beards seems now to be in decline but there were still very many on display ranging from begrudgingly cool to laughably ridiculous.  There were also a few twats with waxed 'taches.  Dungarees seem to be popular which is odd because denim is horrible in this kind of heat and they make the wearers look like minions. 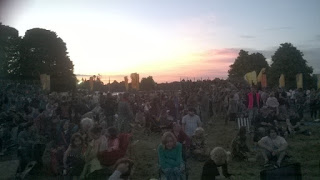 We were back up with a bounce on Sunday but it was till early afternoon by the time we made it to the lake stage to rendezvous with not only Mr & Mrs G but also other dear friends AKA 'the chemical brothers' who had actually become triplets.  Most of the day was spent in this exalted company, starting off at the Lake arena where we barely listened to a couple of unknown bands whilst chatting and laughing.

First performance of the day was punk trio Skinny Girl Diet who performed a short, high energy set in the Alcove which was packed and a lot of fun.  We also caught a bit of Minor Victories in the big tent which was forgettable, apparently. Sunday was fucking hot so after that we chilled out in the shade woods beside the Sunrise arena and settled for the music coming out of the tent.  First was some almost country from Marlon Williams that actually turned to blues by the ended of the set.  After the dodgy start it wasn't that bad.  Next came Little Green cars who sounded OK but we left before the end.  Dinner today was a Macaroni cheese which was the best meal I had all weekend but it still has to be said, piss poor VFM.

By early evening the big tent was just about habitable and we were in position in time to see Roots Manuva play a cracking set of dub/dance/reggae/rap finishing with a blinding rendition of 'Witness ...'.  After that we all head over to the Obelisk for the final part of the day.  M83 performed and were pretty good overall and very good in a couple of places.  They did a decent job of warming the crowd up for the main event. 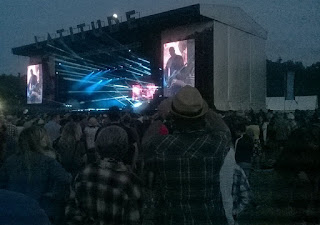 We had come together on this glorious sunny Sunday to see a band that none of us had seen before, New Order.  None of us were huge fans but all of us recognise that New Order have influenced a great many of the musicians we like more.  All main stage headliners have the benefit of a big stage and an impressive light show, New Order took full advantage of this.  They started slowly but played a good set, mixing a few new songs into the list of old favourites.  I love 'True Faith' and 'Temptation' sounded great.  It has to be said they don't half look old these days!  They saved 'Blue Monday' for the encore and finished with the crowd singing along to 'Love will tear us apart'.  We all enjoyed the show and I would rate it as a very good performance but not a great one.

After that some had to go home but a few of us were still full of the spirit so roamed the various sound systems in search of something to feed the feet.  Everything sounded good but we eventually found some house anthems being played in the Sunrise and this dragged us in and immersed us.  Unfortunately we got there late in the set and it finished too soon...  Nothing quite hit the mark after that but we managed to stay out almost till the arena close at 0300.

Monday was seriously fucking hot which prevented us laying in the tent for hours.  Instead we had to get up early and pack away.  I'd been dreading pushing the busted barrow all the way back to the car since Thursday but I managed to complete the task without killing myself.

A couple of moans:-   Toilets on the arenas weren't particularly well looked after and there were cases of Flushing roulette this year.
The first time we went to Latitude the food was very good but has got steadily worse each year since.  We didn't eat anything that wasn't overpriced and it was all pretty bland.

This years was a strange festival as I didn't see any performance that really blew me away yet the Purple Princess and I loved Latitude again and probably enjoyed it as much as any.  This year we rediscovered one of the joys of the festival; wandering around checking things out and finding surprises.  Latitude is a great festival in a beautiful setting with the most chilled out vibe you can imagine.  We'll definitely be back next year whatever.

Posted by Michael Hastings at 16:04