It’s been a while since I wrote anything on here, in fact the England cricket team has already landed in Australia and we’re less than a month away from the beginning of another Ashes series, more on that nearer the time.

In the last couple of months I’ve done a bit of fishing and read a load of books, too many to remember right now, maybe I’ll come back to some of those again.  I’ve found my way to a little bit of live music lately too.
In early September the good lady, Mr Green, Mr Red & I travelled to Leicester to see the mighty Eels for a second time this year.  What can I say?  Eels are brilliant live and we all loved it.  Mr Red had never seen them before and was particularly impressed.  It’s hard to pick highlights because all the songs sound great live.  I love “Fresh feeling” and live this has a very different sound.  "Wonderful Glorious" was just that.  The only thing missing was the “wow factor” of previous Eels gigs.  As expected it was pretty much the same set we saw in March so there were few surprises but it was another first class performance for the best live rock band on the planet.  For a fuller review of an Eels gig, click here.
http://alittlebitofaread.blogspot.co.uk/search?updated-max=2013-05-01T14:54:00-07:00&max-results=7&start=7&by-date=false 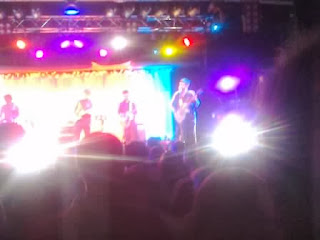 Towards the end of October I made my way to the Norwich UEA to see “The Cult” along with Mr Red, Mr Blue and Mr Green.  As is usual Mr Green drove and what should have been a relaxing cruise north for me was blighted by nuisance phone calls, as is also usual.  The venue was rammed and the extra hassle outside the hall made us too late to see the support band Bo Ningen.  This was a shame because I’ve seen them twice before and enjoyed them both times.

So the Cult.  Fairly successful towards the end of the eighties I quite liked them at the time and saw them live back then too.  The “Love” album had a bit of a gothic sound and a few stand out tracks which were bloody good.  The following album “Electric” had more of a commercial hard rock sound, a few hits and made loads of money.  I didn’t like it anywhere near as much.  A few more similar albums, drug and alcohol problems, break up & reform etc.  Following the typical rock band path to present day.  Right now the Cult are celebrating their ‘Electric’ album with a 25th anniversary tour, which seems to be the in thing for lots of old bands nowadays.

So the gig.  The hall was packed and the view wasn’t very good at all.  No bother, Mr Red & I are both short arses so well used to gigs being like this.  At one point my view was completely blocked by Mr Red himself, I found the irony of this hilarious but I digress.  The Cult came on and played the Electric album.  This was OK, I remembered a few tracks which were pretty good.  They then went off for a few minutes and left some surreal music/video playing.  This was bollocks.  The Cult returned and played a selection of songs from their other albums.  “She sells sanctuary” was the undoubted stand out, a few others were pretty good.  The singer, Ian Astbury is from oop north somewhere but you wouldn’t know it from the mid-Atlantic accent.  The Cult have no connection to their roots.  There were a lot of hard rock clichés throughout the night, the Cult are not shy telling us how good they think they are.  This is particularly true of guitarist Billy Duffy who can surely play a bit but I can’t honestly tell you how good he is.  He’s very good at the rock ’n’ roll pose and posture.

We all enjoyed the gig but it was not one that remained in the memory, at all.  For example, “Sanctuary…” with Mr Duffy mastering his guitar was a great moment but the high wasn’t maintained by what followed.  The Cult are a decent enough band but that’s as far as it goes.  They’re not as good as they think they are and they’ll never be great.

Finally in early November, Jools Holland with his R&B orchestra at the Ipswich Regent.  As we entered the venue I began to feel uncomfortable.  I’m used to being one of the oldest people in the audience but tonight me and the lady were definitely amongst the youngest.  This wasn’t my kind of crowd.  Also our tickets were in the circle, a good view guaranteed but the atmosphere is rarely as good.  It made a change to see the support act which was Nel Bryden.  From up in the gods she resembled a slim Matt Lucas in a dress but apparently there was a good reason for the hair loss and up close shes a good looking girl.  I’ve seen a lot of singer/songwriter girls with guitars but Nel Bryden was definitely one of the better ones, good songs, good voice.

Jools Holland performed with his orchestra consisting of a twelve piece horn section, drums, bass, keyboards guitar and a couple of backing singers.  At any time there could be up to twenty people on stage.The band was fantastic, great musicians playing  great R&B tunes as tight as you like.  Also there were guest vocals from the awesome Ruby Turner and surprise of the night, Spice girl Melanie C.  Ruby is a Jools Holland regular with a great presence and a fantastic soul voice.  Mel C was a spice girl.  To be fair she doesn’t need the money so I assume she was doing it for the fun of it so that’s OK, I can forgive her and the Stevie Wonder cover was blinding.  But when it comes to singing both the backing singers and Ruby Turner were different league as they showed during the encore “Enjoy yourself”.


Musically Jools & co played a very good show which we thoroughly enjoyed but my misgivings were justified, the crowd was content to sit and clap and only a few danced towards the end.  Good gig that would have been very good with a different crowd.

Posted by Michael Hastings at 14:02