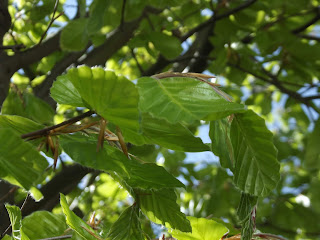 I’m sitting in the garden for a change; it’s another beautiful clear, blue sky day, a warm spring day with not a single cloud.  When I first sat down I could hear a dog barking but that has stopped now, there’s just the road noise which is rarely far way, even in a lockdown.  The Co-op over the road is honey pot for this drone.  And a bee is buzzing somewhere close; the wind is making the gate knock in the lock, rustling the dead leaves and whispering through the fresh ones.

Somewhere in a nearby garden someone hits something metallic with a hammer, once, twice, three times…  The insect buzzing comes and goes; I still haven’t located its source.  What a way to spend a spring day, I’ll be confined so for a few weeks yet.

From across the road comes the rattling of shop trollies.  At the moment there are no birds in the sky and there seems to be very little birdsong but when I manage to retune my ears it’s there in the background.  When the human racket recedes it comes to the fore.  Away in the distance an emergency vehicle uses its siren and what must be a motorcycle goes through the gears as it heads east and fades to a murmur. 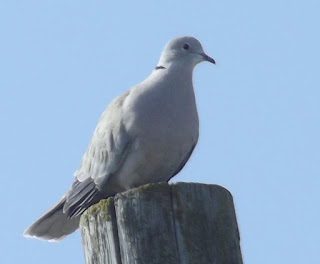 A Dove flies over and another sits on an aerial a few houses away, two Gulls drift across the blue as well.  I walk to the far end of the little garden and back but don’t see any more birds in flight; the sound of their songs is becoming easier to pick out now though.  From somewhere comes the call of a startled Blackbird but I can’t see the culprit, I hear a duck quack and there it is, flying quickly towards the river valley.  Then a Wagtail passes over with its dipping flight never making it close enough to really see.

There’s been a buzzing since I sat down and I haven’t been unable to locate the culprit, then the penny dropped.  It was coming from the box that houses the gas meter.  I opened the door and let a confused Bumblebee have some fresh air; I wonder how long it had been locked down?

The Hammer sound has started up again, rhythmical and persistent, and from another direction comes the grind of some kind of garden or DIY power tool.  I suppose I am concentrating on the sounds because the vista is so small and familiar.  All I’m really doing is sitting on a garden bench which threatens to give me arse ache and writing the things that come to mind although my pen is a long way behind my brain.

So let me concentrate on what I can see for a minute or two.  To my left is a mini greenhouse that has surprisingly stood up to the winter storms but it doesn’t look like there’s anything growing inside that came with an invitation.  Beside it is a brick shed with a large wasp like creature paying close inspection.  It doesn’t want to be looking for a home as it will find itself most unwelcome.  I can’t prevent myself from unlocking the shed to investigate; a wasp nest is the last thing any home needs.  I open the door warily, the creature has found its way inside but is not part of a gang, it buzzes through the open door and past me, it sounded pissed off.  What lies inside the open door reminds me I want to go fishing.

Back on the bench, opposite me across the square of paving slabs sits a big black plastic chest and a small, green upright shed type thing, both of these house garden tools and stuff.  Beside the shed is an old plastic table which is covered in flowerpots which contain mostly dead things and weeds but they are splashed with wild sown flowers, mostly small Pansies I think? There’s a smudge of grey on one of the slabs because yesterday I made a fire…  Interrupted by a Goldfinch on the wire but it didn’t stay long enough for a photo…  Anyway I have a pile of Beech branches from this year’s scalping to dispose of.  In the space I have, building a bonfire and getting rid of it all in one go isn’t really an option, as tempting as that might be.  Instead I kept things small; the base was made from two foil dishes that brought quiche into the house.  These were surrounded by three pieces of broken concrete slab which provided shelter and containment.  I know how to build a fire because I was a Scout as a youngster and I know how to keep things safe because I’m not a fucking idiot.  Once it was burning I fed it with small amounts, little and often.  To be honest it will probably take about four more fires of a similar scale before the pile is disposed of, but hell I’ve got the time at the moment. 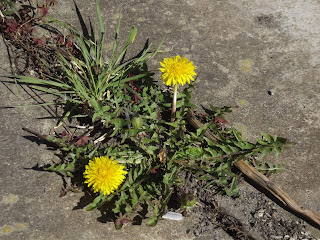 Now to my right there is Ivy growing up the fence.  It is looking a bit bedraggled as I’ve had a couple of bouts of hacking at it over the last few months.  It was starting to get too big for its boots and was taking the piss, threatening harm to the fence.  I expect we’ll be going toe to toe again before very much longer.  Then Shelley’s bike leans against the fence, shrouded in a dark waterproof cover.

Further round, the Beech hedge is starting to form the barrier it was planted for.  Most of the ten trees have leaves now to some extent, the foliage gets thicker every day.  A couple of the trees are well set now and all the leaves are the light, bright, fresh green shades of spring.  They will get darker as the weeks go by.  I have a good understanding with the hedge, as I mentioned, I scalp it every year in late march and bar the occasional trim I pretty much let it do its thing.  It has turned out an odd shape for a beech hedge but it does the trick and for most of the year it provides the privacy we are entitled to. 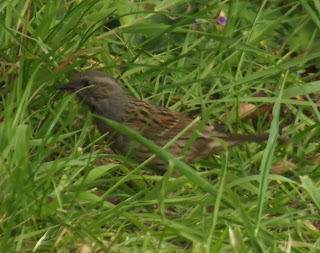 The lawn is not fit to be called such.  It is a small patch of green grass, beds of clover and dotted with dandelions.  It’s all pretty green so passes as a lawn in a way but it’s pretty patchy towards the fence and hedge.  Here most plants died because I could never be arsed with sweeping up the leaves but this year I made an effort.  I also supplemented the grass with the unwanted tufts that grew easily between the slabs, cleverly transplanting them to the bare patches where they would be welcome.  I’m keeping half the grass mown as normal but allowing the sparser areas to grow higher and carefully strimming when necessary. 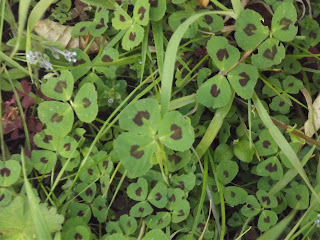 Just as I’m about to go looking for more bird life two Pigeons fly over, will I see anything else at the other end of the yard?  No, just another Pigeon but there are still the teasing songs of birds unseen.  I pay close attention to the hedge and see that seven of the ten Beech trees have leaves now, just the fifth from the left, the eighth and the ninth are still to open buds.  The sixth from the left opened up first, followed by the fourth, seventh, first, second, tenth and third.  The ninth one (aka the lazy tree) is always last but I can’t guess which out of five and eight will be next.

Another pigeon flies over, its shadow crosses my page and a small white butterfly flits in and then up and away.  Now more persistent buzzing and up to my left a bumblebee appears to be courting with the flat roof, maybe the one I released earlier?  I like to think so.

How long have I been out here?  It could be five minutes, it could be half an hour and when I next look at a clock I’ll be none the wiser.  And still the sky as brilliant blue, still the east wind rattles the leaves and gate and the somewhere birds still sing. 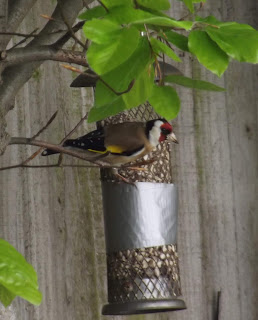 Then something small and shrill lands on next door’s aerial, I’m pretty sure it’s a Goldfinch, yes it’s mate flies down into the garden while the first still sings and stands sentry.  A few seconds later the second Finch is back, it perches on the feeder for a second or two but I make it nervous so it hops atop the fence.  We both sit and eye each other; I am still and silent, he/she is fidgety and noisy.  Then it leaves and joins its mate, they fly away in unison but come back across the garden a minute or two later.  The Goldfinches have started to visit the garden regularly since the first leaves appeared which was eleven days ago now, for the first couple of lockdown weeks I never saw them. 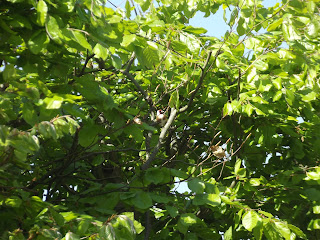 The longer I sit here quiet and still the more things happen.  A Blackbird lands on the grass and skips around a bit, never getting within a couple of metres but my presence doesn’t spook him.  When he leaves I sneak to the corner and peer round; the Goldfinches are back, using the hedge as cover while they mount raids on the other feeder.  There are Sparrows here two but they are more interested in the splitting buds on the branches and are much braver than the Finches.  I suppose they should be as we pretty much cohabit, the last few years have seen then nesting both in the hedge and under the eaves of the house.  As neighbours go they are pretty good but they are noisy buggers first thing in the morning. 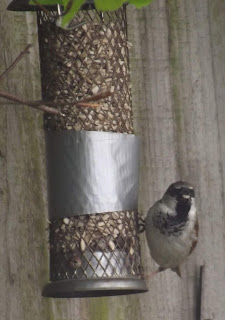 Posted by Michael Hastings at 04:57