A few weeks ago…

The Wailers, Peter, Bunny and Bob, joined by the Barrett brothers; Carlton and Aston AKA “Family man”.  A few years later Peter and Bunny left and the group became Bob Marley and the Wailers and conquered the world.  Sometime during the late seventies I became infected with the music which I have loved for a lifetime.  Line ups changed but Bob and the Barrett brothers remained.  After Bob’s death the Wailers continued to tour the world but by 1987 Peter and Carlton were gone, Bunny wouldn’t leave Jamaica so only “Family man” remained but the Wailers still toured.  For some reason I never got round to seeing them, it couldn’t work without Bob, could it?

In 2006 I turned up at the NEC to see UB40 for the third time.  My love of reggae had spread and although much maligned, UB40 were a fucking ace live band.  As I walked into the arena I glanced at the poster and stopped in my tracks; “Special guests, THE WAILERS”!!!  What a brilliant surprise!  After all these years I was going to see the bass player who started it all.  The Wailers walked on and there he was, Aston “Family man” Barrett, the man who provided the rhythm to a large chunk of my life up until then.  I loved the show, Bob’s songs played by authentic musicians, sounding great, getting the crowd moving.  Later UB40 were excellent as ever but couldn’t match the moment when I saw 'Family man' play.

So a decade later and the Wailers are still on tour and as they were playing nearby it would be rude not to go see them.  Unfortunately the first date was cancelled but was rescheduled for this March and the Purple Princess, Maddie and I drove north to the Norwich UEA.  What should we expect?  Well I knew they’d be professional, put on a show and we’d have a good night but are they any more than a tribute act these days?

The band ambled onto the stage, there’s “Family man” settling his seventy year old frame into a chair, minor adjustments then the unmistakable bassline “Natural mystic”.  It sounds great, the band are tight but the crowd is only simmering.  Next is “Buffalo Soldier” the rhythm picks up and the crowd go nuts!  After that it pretty much stayed that way, the Wailers roll out the hits, one after the other; bang, bang, bang.  The audience was hooked, the whole room is dancing and most are singing along.  This is beyond good, this is fucking ace!  I look around, Shelley and Maddie are enjoying it as much as me, this is as good as it gets.

The band look like they are having the time of their lives and this time consists of a few more former bandmates of Marley.  Junior Marvin is on guitar and vocals, Earl “Wire” Linsey on keyboards and Don Kinsey on guitar.  Family man gets the biggest cheer of the night and responds with a trademark grin along with a ‘Black Power’ salute.  Aston junior plays drums and Josh Barrett shares the vocals, I presume these are two of Family Man’s forty one children.  The line-up has an authentic feel and the sound is real, real, real.  This is the nearest thing we’ll ever get to seeing Marley and we are fucking loving it along with the whole room.

The Wailers play for an hour, they don’t let up and the audience doesn’t let them down.  This has taken its toll on Family man who is helped from the stage.  He’s stilling smiling and gives another salute and receives the adulation deserved by genuine A list legend but he doesn’t return for the encore.  The rest of the band play on and replacement bass by Dready Reid (I think?) is up to scratch.  One newer song written by the younger element then a load more classics.  During the night the Wailers played everything on the ‘Legend’ compilation and more; Exodus, No woman no cry, Jammin’, Could you be loved, Lively up yourself, Redemption Song and on and on.  However I have to be a tiny bit picky, “Trenchtown rock” would have been niiiiicce.  Another half hour of music before the Wailers departed for good, they played a blinder and the crowd gave them the reception they deserved.

Some gigs I look forward to for weeks and these are great, other gigs sneak up on me.  I go with no expectations and I’m blown away.  I should have known The Wailers would be good, it shouldn’t have been such a brilliant surprise but it was even more so because of it. 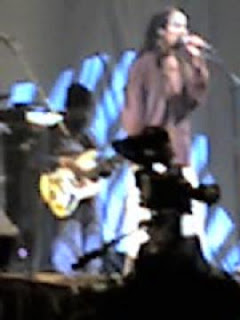 The Wailers in 2006, that's 'Family man' in the background
Posted by Michael Hastings at 13:43