24/03/13
Where do the days go?  Rain ruined the second test and here we are after three days of the final match with England staring down the barrel of a series defeat.  This New Zealand side have a good looking batting line up which should see them climb the rankings over the next few years but their bowlers haven’t looked as good.  They have been good enough to dismiss England cheaply twice however and if they can do it a third time they’ll deserve the series win.  England haven’t played as well as they can in this series but if they can find their best form over the final two days then they are good enough to at least save this series.

Here on an English spring Sunday the temperature is -2 and we have several inches of snow on the ground with more falling, it’s bloody horrible.  I’m usually pretty relaxed about the weather, we get what we get and it’s mostly shit but this winter has gone on forever, it’s become oppressive.  According to the Sunday papers it's the longest winter for fifty years.  I can’t wait for spring, even ten degrees will feel like a heat wave and people will be smiling again. 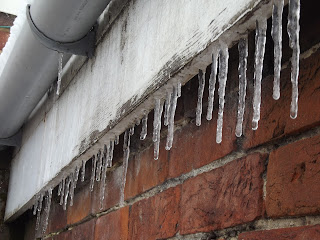 I finished reading “A Clockwork Orange” by Anthony Burgess recently, this story is probably more famous through Stanley Kubrick’s film. Published in 1962 the story is a grim prediction of a future where society has crumbled and gangs of teenage thugs own the streets.  The state responds, attempting to crush this with police brutality and mind control.  In the background politicians try to manipulate the situation in an attempt to win votes.  Fifty years on how far wrong was Burgess’ vision?
It’s told in the first person through fifteen year old Alex, a character who likes nothing more than getting high, mugging, rape and “ultra violence”.  He’s not a very nice lad and the teen slang he uses called “Nadsat” is hard to pick up at first.  Eventually the reader picks it up but it’s difficult to follow and makes reading it a chore.  Does Alex deserve the things he eventually goes through?  Does he truly repent or does he just grow up?
This is a clever book, skilfully written and it works far better than “A Catcher in the Rye” for me but it is a pain in the arse to read at times.

Next up was “Life of Pi” by Yann Martel and this I really did enjoy.  Nothing I’d seen in the film trailer made me want to learn anything more about the story but the kids were getting itchy feet in the bookshop, there was a 3 for 2 deal so I thought this would do for my third choice.  Pi, Aka Piscine Molitar Patel is a young Indian lad who is fortunate enough to live in a zoo.  The book starts here and goes nowhere for a while until the life changing news that his family are emigrating to Canada.  The animals have all been sold, mostly to North American zoos so all are to travel to the continent across the pacific on a cargo ship.  Things go wrong, the story begins and from here it is hard to stop reading.  Pi finds himself adrift in a lifeboat with minimal survival supplies but a strong will to live.  He is not alone in the lifeboat however…
The short chapters make this book easy to dip in and out of, it is written in a way that filled my mind with the scenes and images.  Even the brutal passages are told in an almost matter of fact way.  At the end I know what I wanted to believe but... I really enjoyed “Life of Pi”, probably the best book I’ve read this so far this year.
Posted by Michael Hastings at 06:17