A day at the test

The day started with an ungodly alarm clock call at 0645.  Tea and toast then on a short drive to rendezvous with the rest of the family.  There were ten of us travelling to Nottingham in two cars.  An easy journey in the early morning sunshine but we were all impatient to get there.  The last few miles into the city are a drag but eventually we cross the Trent and Park the car.  A little after two hours after leaving home we’re climbing out of the cars.
This trip has been arranged a long time, in fact the tickets were my Christmas presents to my Mum & Dad plus my sister and her family.  Most of us have been to test matches before but amongst our number are four test match virgins.  The match is well poised, the weather forecast is perfect and we have a full day of play ahead of us. 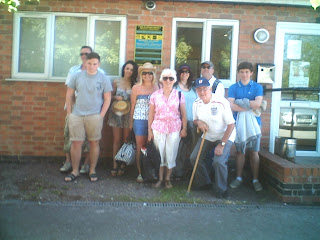 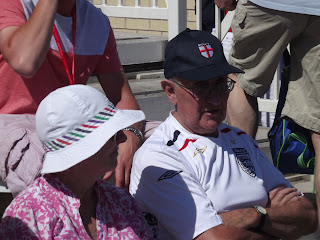 We make the short walk back across the bridge and soon make it to the ground.  As usual the queues move quickly as the stewards are efficient and friendly.  We soon take our seats in the front row of the new stand and discuss the day ahead.  Surely Strauss will make a double century and Pietersen will smash them all over the park? 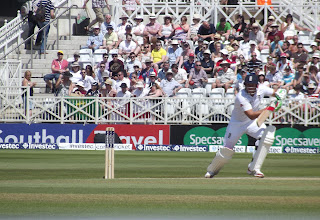 Play begins on time.  KP hits the first boundary of the day but we’re all gutted when he’s out for 80, LBW to Rampaul shortly afterwards.  Bell comes in and makes the game look easy but when Roach takes the new ball it’s a different matter.  Bell is out quickly and Bairstow comes to the wicket.  To be frank the youngster is out of his depth and Roach makes mincemeat out of him.  If he’s to have a test career he needs to learn to play the short ball.  Prior is in next, he always makes runs when we’re at the ground…except today.  At lunch England are 340-6 and still trailing.  We’ve had a baking sun on us all morning and we’re starting to feel the effects of it but thankfully the roof of the stand will shield us soon.
The afternoon follows on in the same vein.  Runs are difficult to come by, the pitch seems two paced and the West Indies are bowling well.  Strauss departs for 141 to a wide delivery from Sammy.  This brings Bresnan and Broad together and they manage the most fluent partnership of the day, reaching 50 between them in less than 15 overs before Broad is out sweeping Shillingford.  The end of the England innings is a farcical affair as Samuels takes the last two wickets in strange circumstances using the DRS.  England are all out for 428, a handy lead of 58 runs.  Not what we expected however!  We all hoped to see England cruise past 500 then set WI a tricky half hour spell to survive.  Instead they have a full session to get stuck into the batting after bowling themselves back into the game. 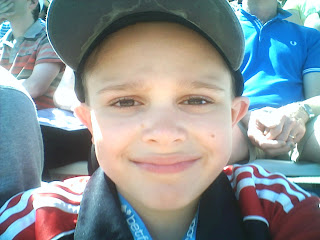 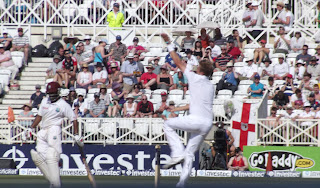 Anderson and Broad open the bowling straight after tea and straight away Jimmy is in the groove bowling Barath and trapping Powell LBW.  Broad bowls poorly, giving WI a four ball in every over but it’s one of these that gets the next wicket as Chanderpaul top edges him straight down Trott’s throat at DBSL.  The talented Bravo offers resistence but is eventually out for 22, LBW to Bresnan.  For atmosphere it’s by far the best session of the day as the crowd roars on the England bowlers and it’s carnage out in the middle.  Amongst it all Trott makes friends by signing autographs for children at the boundary edge, including a delighted Isaac!  Bresnan accounts for Ramdin and the hapless Edwards and only Marlon Samuels offers any resistance.  At stumps the score is 61-6 and WI are out on their feet.  England’s bowlers have seized the initiative and there will only be one winner now. 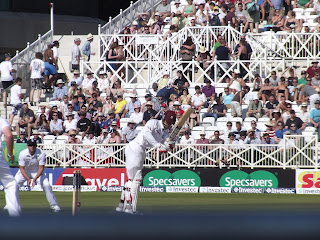 My family and I have all had a great day.  The test match virgins have thoroughly enjoyed the experience and are determined to do it all again one day soon.  The journey home is long and tiring and kind of sad after a great day at the cricket.  It’s about ten o’clock by the time we get home, a fantastic fifteen hour day comes to an end.

Marlon Samuels leads the West Indies rear-guard but even his unbeaten 76 will not halt theinevitable.  West Indies are all out for 165 with Anderson and Bresnan taking four wickets each.   I catch a bit of TMS on the radio at break times…it would be great to be back at the ground again… England cruise to victory just after tea on the fourth day.  Strauss made 45, Cook was unbeaten on 43 and Trott finished on 17.  England record an emphatic nine wicket win and their seventh consecutive home series win.  The last team to beat England here was South Africa, who happen to be our next guests later this summer.  I can’t help feeling that we have to improve if we are going to win a three match series against the saffers.  I’ve said it many times before but I’d love to see England bat Prior at 6 and play five bowlers.  Steve Finn is simply too good to leave standing on the sidelines!
Posted by Michael Hastings at 14:18